I made this trip in October of 2008.  It wasn’t planned and I did not intend to come back.  At the time I was in college attending school for Environmental Engineering.  I felt as though my life had no direction, so I figured I would just leave and go do what I loved the most.  I decided to leave in the middle of the semester for an indefinite climbing trip.  I figured that I could really think about my future and maybe figure out what I wanted to do with it.  I did end up coming back to school the next semester as a Geophysics Student and would eventually graduate three years later.

I packed up my things in 2 days, and began my adventure.  I left with little money and decided hitch hiking sounded like more fun.  I literally hoped my backyard fence and began the adventure.  My ultimate destination was Yosemite National Park.  My parents still do not know to this day that I dropped out of college for a semester.  Along the way I met interesting people, very nice people and had a great time.  I even witnessed a gang shooting while walking through Bakersfield, CA.  I made it to Merced, CA where I went to the bus station and bought a one way ticket to Yosemite Valley.  My bus got there late at night but while driving through you could see the walls of El Capitan glowing in the moonlight.  It took me 5 days to make it, along the way I spent a total of 23 dollars.  That’s 2 dollars for 100 miles.

Once there I met climbers in Camp 4.  This is the campsite that has deep routes in the beginning of climbing history.  Here you can find anyone to climb literally anything, never a shortage of partners.  I climbed with a girl form Australia, she was very nice and let me stay in her tent because I didn’t have one.  We climbed numerous routes including the Northwest Face of Half Dome, Direct North Buttress and soloed numerous moderates together.  She left the valley and my friend Chris Leonhardt arrived in the valley.  We climbed together for a few days but he ended up leaving early, we tried to convince him to climb The Zodiac on El Capitan with us but he declined and drove home.  I felt pretty bad that he left early because of how far he drove.

Two days later me and Gary (in the photos below) began our 3.5 days ascent of the Zodiac on El Capitan.  This was my first ever aid route/big wall.  But I had told Gary that I had climbed El Cap before so that he would feel more comfortable with me.  It didn’t matter that I didn’t have any experience on big walls because I knew how to do everything already, including hauling, aiding techniques, excellent rope management skills, and the fact that I didn’t give a shit how scary anything was.  I would just go for it.

We had a great time on the route and did 7 pitches the first day, and 3 or so more each other day.  There was one pitch that stuck out to me on the route and still freaks me out every time I go back to climb the Zodiac.  Pitch 14, 100 foot 5.10d off-width crack (Too big for hands, too small for body and very awkward).  You need 3 large cams to appropriately protect this pitch, we had none.  Because my free climbing skills were much better than Gary’s I was the one to lead the pitch.  It was basically a solo with no protection for 100 feet of full on climbing, except for an old rusty rivet in the middle of the pitch.  At the time I have only been climbing for a little over a year.  If I were to have fallen at the top of the pitch, I would have take the biggest fall of my life.  A 200 foot fall with a nice ledge to bounce off of half way through.  This one goes down as one of the scariest pitches (Top 10) I have ever led.  Since then I have been back to climb this pitch 2 more times, each time much easier.

The notorious pitch 14, me on lead with some protection finally in at the roof. 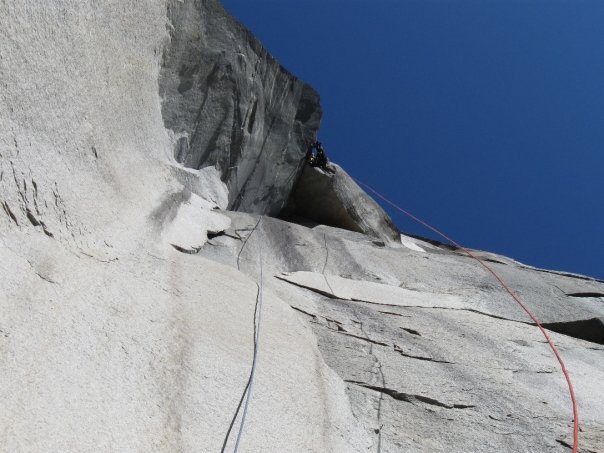 We topped out that same after noon and camped out on the top of El Capitan.  A successful first El Capitan route and now my favorite route on the big stone.  Since my first climb on El Cap I have climbed 12 other routes a total of 20+ times including The Nose in 7hrs 16 mins and Half Dome in 5hrs 34 mins in the same day for a total time of 18hrs 44mins Car to car with my friend Kyle Anderson.  My love for the Yosemite Valley grows stronger every time I visit.  It is a one of a kind place with an energy that is unexplainable.